The tubes used in MIGS operations (Minimally Invasive Glaucoma Surgery) are still not without complications. That is why Chemelot InSciTe developed a new glaucoma implant together with Maastricht UMC+, TU Eindhoven and InnFocus (A Santen Company).

Glaucoma is initially treated with eye drops and laser treatments but if that is not sufficient, surgery usually follows. As an alternative to traditional glaucoma surgery, minimally invasive glaucoma surgery with MIGS (Minimally Invasive Glaucoma Surgery) has been developed in recent years. MIGS are mini tubes and stents that are placed in the eye to promote the drainage of chamber water and thus lower the eye pressure. The procedure is less invasive than the other way of operating, but: "The implants that are currently used still involve a lot of complications," says Filip Maes, project manager for Biomedical Projects at Chemelot InSciTe. "The implants are usually made of medical silicone. These can lead to inflammation and fibrosis."

The aim of the SEAMS project at InSciTe is to optimise the existing technology, improving both the acceptance of the implant and drainage. SEAMS (short for Smart, Easy and Accurate Minimally Invasive Glaucoma Surgery) has now produced a new glaucoma implant made of material that is also used in open-heart surgery and is more compatible. Filip Maes: "Moreover, with the tube we developed you can control the drainage of the eye even better. By applying an external stimulus to the tube, the tube shrinks or expands. In this way, more or less fluid can escape and you can search for the optimum balance for each patient." 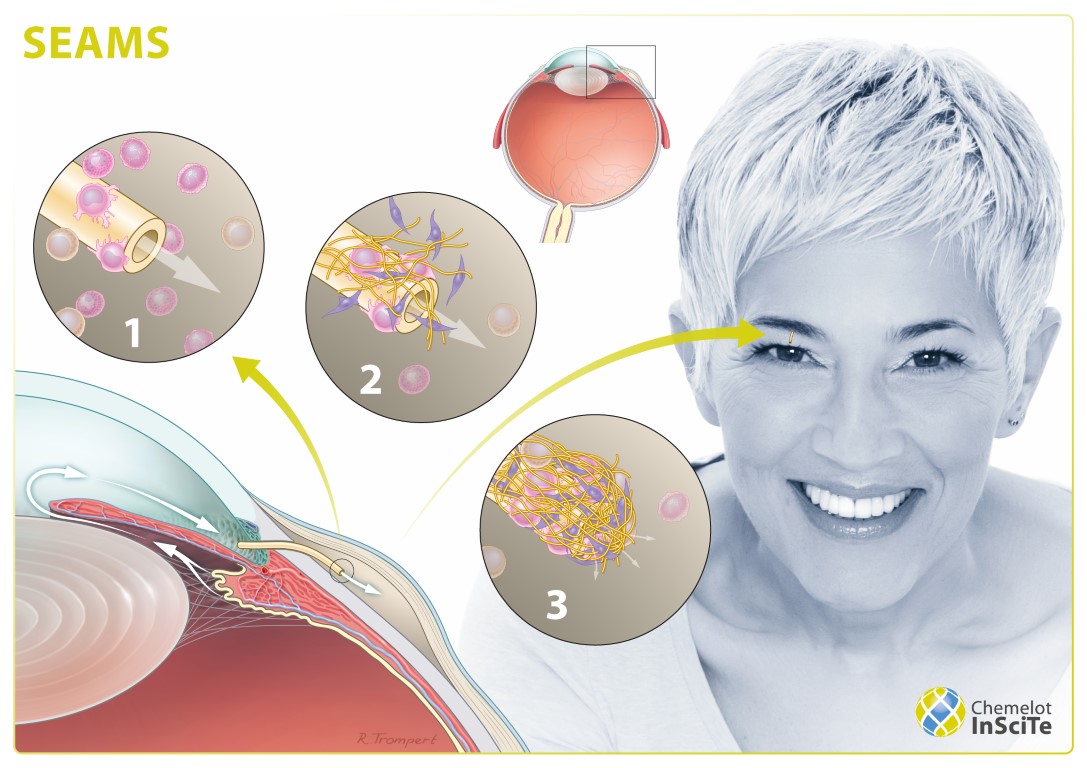 As a spin-off from SEAMS, Chemelot InSciTe and its knowledge partners are now working on ISEA, which stands for Innovative Surgeries for Eyes with Advanced Glaucoma. Filip Maes: "We are looking at solutions for patients for whom no treatment works. The eye is at such a late stage that it can no longer tolerate anything and the implant is rejected. These include people with refractory glaucoma or patients who have already had (several) intraocular operations. "For these patients, we are now developing a device with a slightly larger base plate, which we expect to remain in place. We also hope to be able to help the remaining patients in whom the implant would otherwise be rejected." This new implant is now also almost ready. "There is still a round of optimisation to follow, after which we will start the clinical trials."

To prevent scar tissue as much as possible, InSciTe has also developed a method for the controlled release of antifribos drugs. The medication is contained in a small ball that is inserted together with the implant. Filip Maes: "We are now using it for glaucoma, but the delivery system obviously has a broader scope and can also be used for other conditions.

Please find the original Dutch article in the download below: